We have belief in ourselves and each other on our journey of continuous learning.

Take a look at what Year 4 have been doing so far this term. 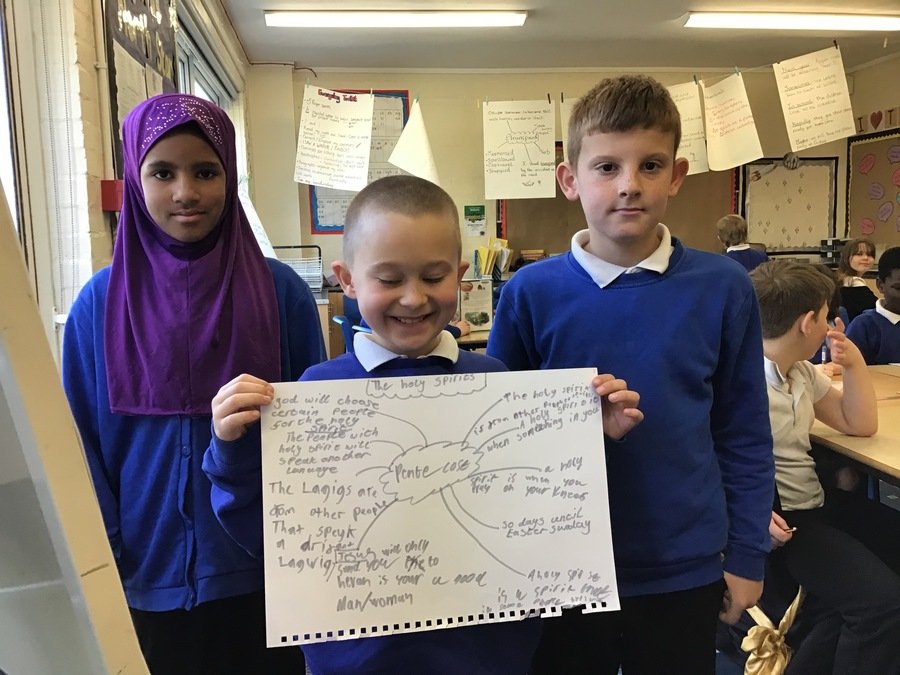 What an amazing start to the term!

This week, Year 4 have been learning about the Christian celebration known as The Pentecost in RE.

We have discussed what caused the celebration to happen, who is was in favour for and how important the celebration is. We have also been looking the importance of Jesus in this celebration and that it happened exactly 50 days after Easter Sunday.

Can you think of a reason why The Pentecost is different to other Christian celebrations and is it celebrated in a good or sad way? 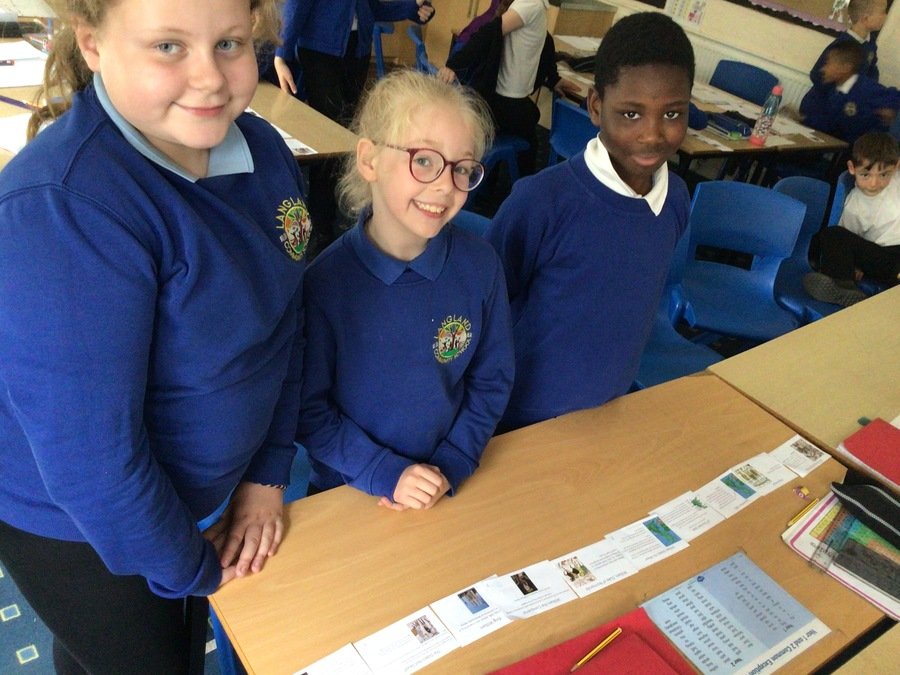 Another interesting and fun week!

This week, Year 4 have been learning about The Changing Power of Monarchs between 1066-1603 in History.

We have discussed what greed can do to people when they really want something, which monarchs reigned in the timeline and who they were. We have also been looking at how significant The Battle of Hastings was in monarch history, why is started and what the aftermath was.

Would you like to be a monarch? What do you think it would have been like back then and how much pressure would be caused? 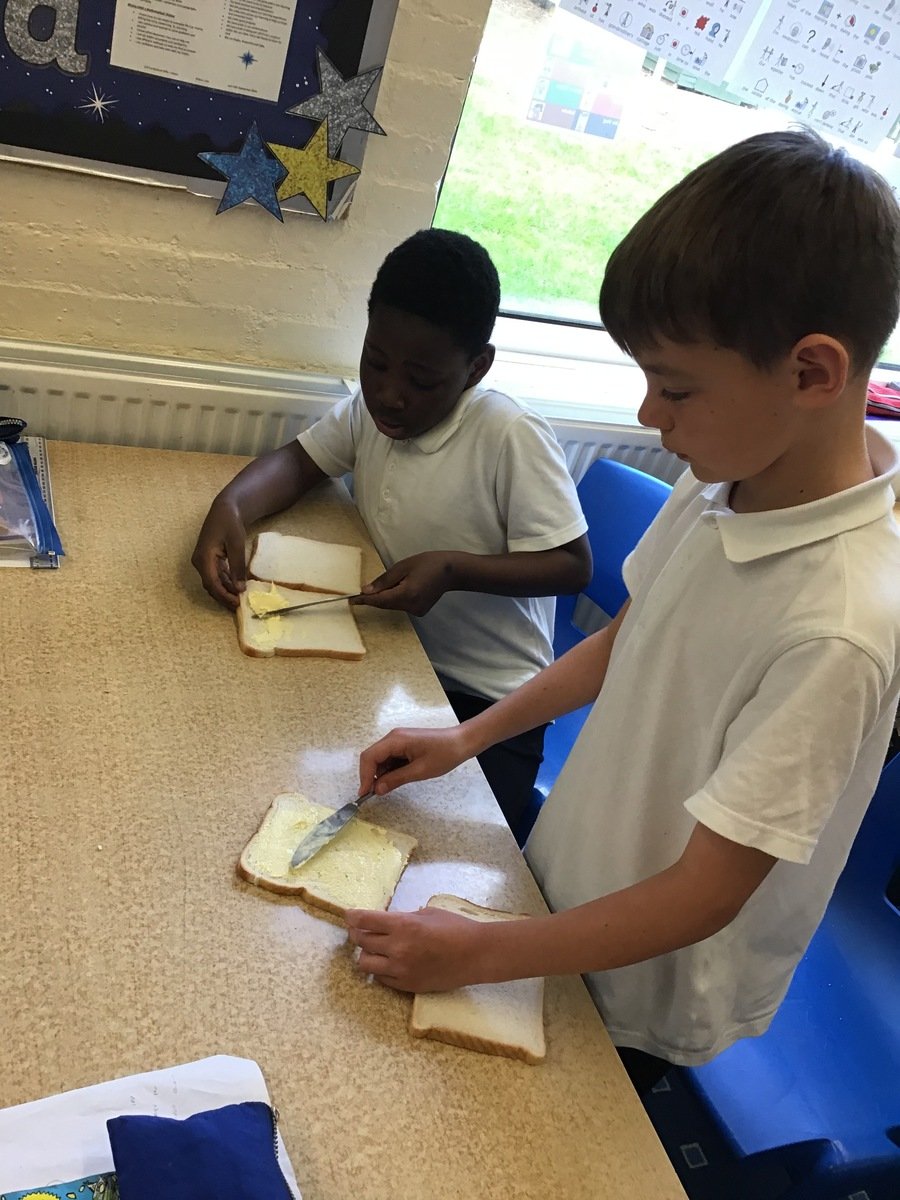 What a fun packed week Year 4 have just had!

The children in Year 4 have been looking at what seasonal food is, which food is available at what time of the year and how we get food from other countries out of season.

Last week we made vanilla and chocolate muffins. But yesterday, we had so much fun making our own seasonal sandwiches. We had loads of different toppings such as salad, ham, cheese etc. Once we had achieved our perfect sandwich, we either designed our own recipe, planned an event or designed a product package for a sandwich.

What is your favourite seasonal food? Do you agree/disagree that we are allowed to get food which is not in season from the supermarket? 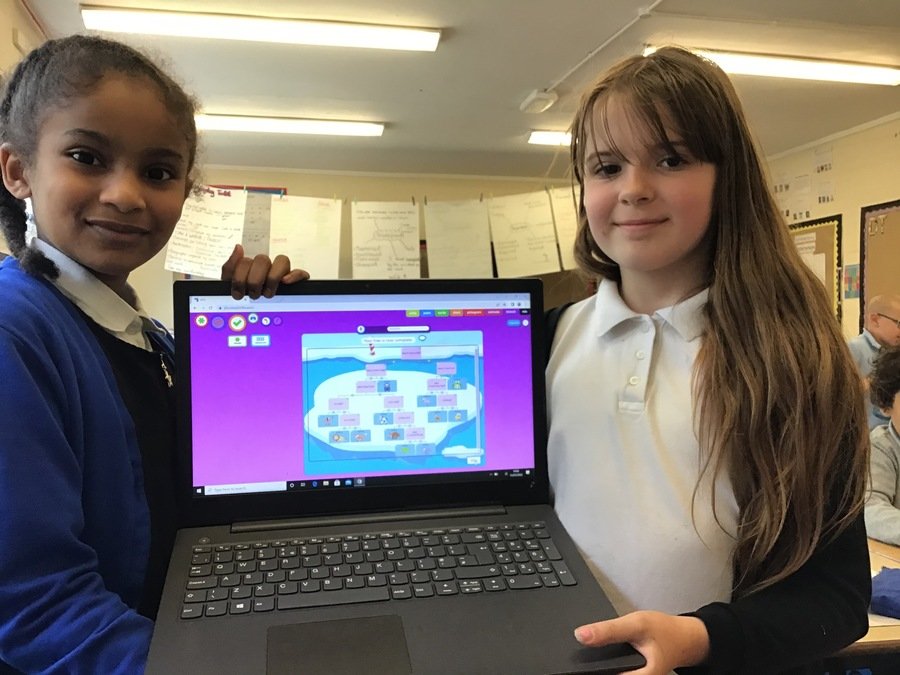 Another fun packed and busy week for our Year 4 children.

Some of the amazing things we have been learning about this week are: Henry VIII, how plants spread their seeds and how to make more delicious seasonal foods. However, one of our favourite things to learn has been in Computing.

The children in Year 4 have been looking at what a branching database is and how to create one by grouping objects using yes or no questions.

Last week we planned our own branching group. But yesterday, we had a lot of fun and it tested our computing skills in making our own yes or no databases. We had loads of different objects to sort. This week we used animals to sort into groups, we either designed our own database, played this in a game or tested our peers to see if they could crack the questions.

What objects would you use in a sorting group? Do you think it would be easy to sort animals by only being able to use yes or no? 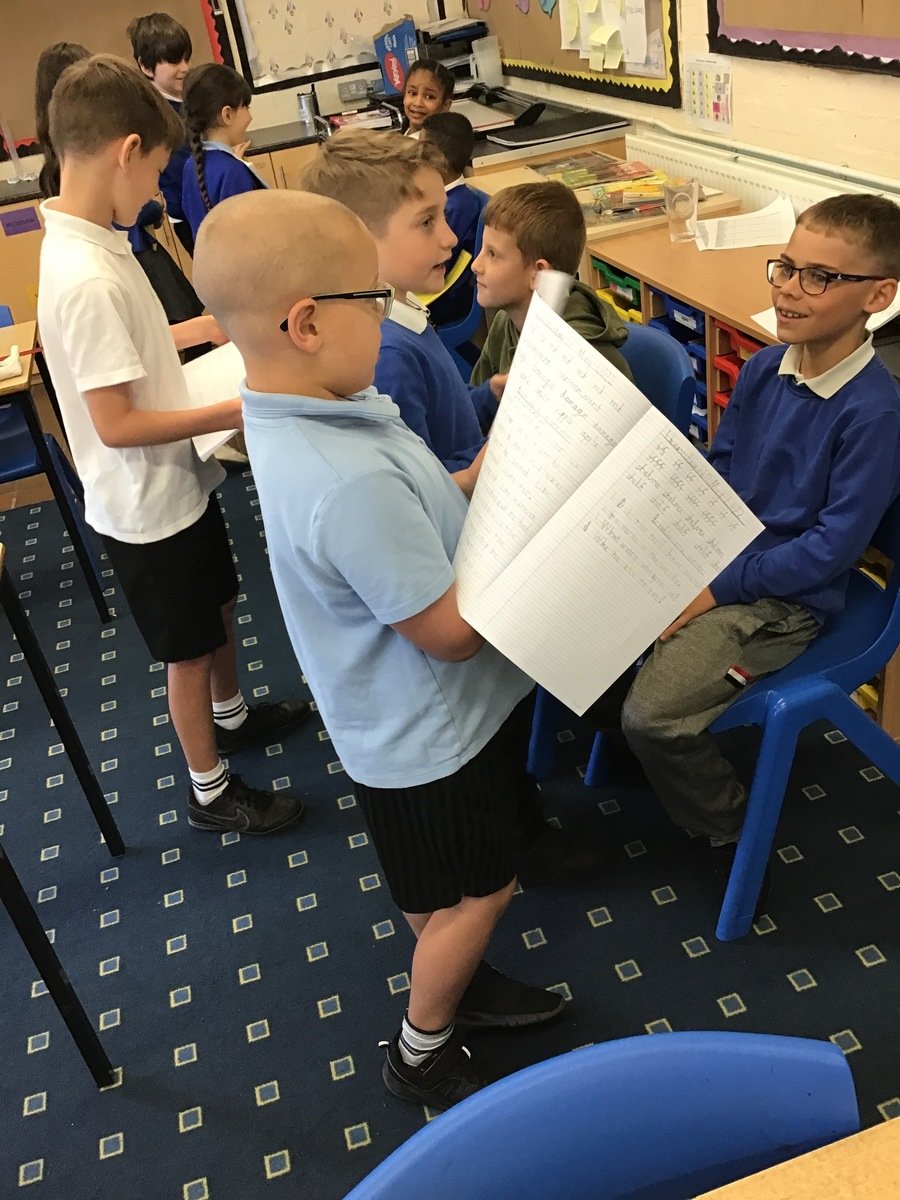 Our last week of term has been super busy but super fun!

Some of the interesting things we have been learning about this week are: Queen Elizabeth, what affects seed dispersal in plants and celebrating the amazing Queen's Platinum Jubilee. Our Jubilee party was our favourite part of the week!

Throughout the week, Year 4 had been learning about Queen Elizabeth and how she became queen, spent quality time making lots of colourful Jubilee buntings and on the Thursday we had a massive party outside.

We had a big afternoon tea feast, we danced our socks off in the karaoke area, we played football matches and even had hula hoop competitions with each other. That wasn't even everything, there were so much more fun things we got up to!

The sun was shining all day and we celebrated the Queens Platinum Jubilee in style.

What did you get up to for the Queen's Platinum Jubilee? Did you have a party? How long has she been the queen for? What does platinum stand for?

Year 4 also had their end of term 100 square party! We decided as a class to have a movie theatre with popcorn and sweet. Before we were able to watch our amazing movie, we had one more important job! In Talk for Writing, we had to interview each other stepping into the role of Mallory and Jared and answering question about the scary troll! 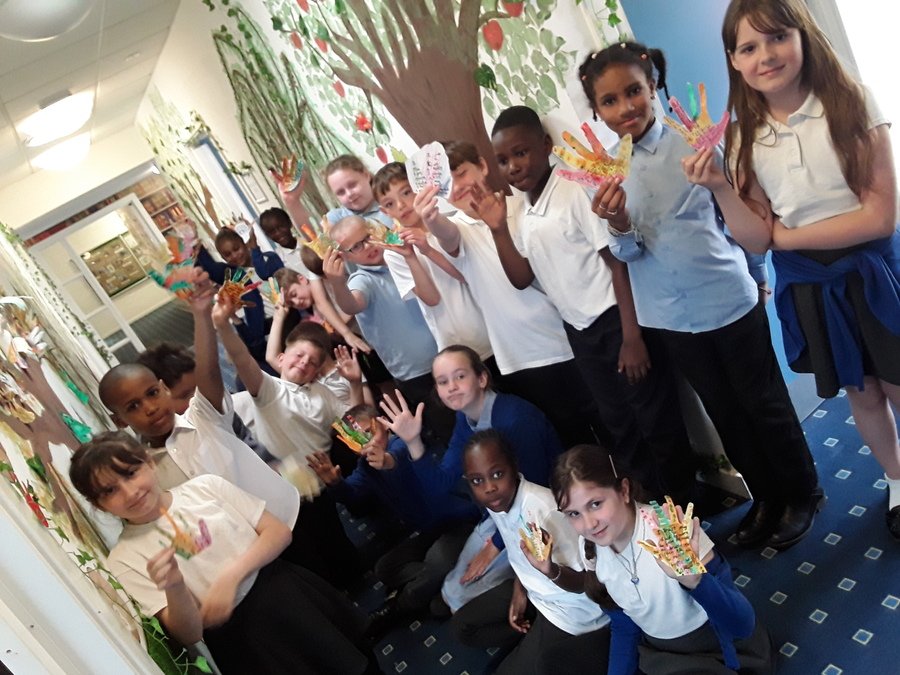 What a fantastic start to the term!

This week, Year 4 have been learning about lots of different units such as fantasy stories, how to produce music with instruments, how rivers are formed and how habitats change throughout the year. Last term was short, so their last PSHE lesson was not completed. The children were able to finish their hands of trust, talking about who they trust, what being trustworthy means and how they can support others.

It’s part of the whole school project based on Trust. They have covered talking about what we think trust is, learning and understanding exactly what trust means, drawing around our hands and painting them natural colours of leaves, writing on their hands who they trust and why, putting their hand of trust on our Tree of trust that’s painted outside the Treehouse, then with support demonstrating how you can trust someone who is reliable by doing trust falls.

Why is trust important? How do we know that someone is trustworthy? Why is it important to be trustworthy to our friends and family?

Year 4 have had a great week!

This week, Year 4 have been learning about lots of interesting topics in Science, Geography, RE, etc.

On Thursday they participated in an amazing class assembly they practiced about environmental changes and how we/weather can affect habitats for animals. Every child created an amazing speech and show cased their well-thought out work. Even in just under two weeks, the children were able to explain so much about this topic and could show everyone in the school how important environmental change is. They then performed a song they had learn in Music called Lean on Me by Bill Withers. The backing track was not working but they powered through by themselves singing in A cappella. They did themselves so proud! Here is the link:

On Friday, the whole school were given the opportunity to join in with the Young Readers Programme in partnership with the Kingston Centre and British Land. They were able to join in on a story telling session. There were two amazing storytellers:

Alim Kamara
A British-Sierra Leonian Hip Hop Artist and Storyteller. He established Storie Storie to share the traditional Sierra-Leonean folk tales of his childhood in the UK. Through the organisation, he performs and runs workshops through schools, businesses and festivals.

Grethe Mangala Jensen
An actress/puppeteer and founder of Sandal Sticks Theatre, a storytelling company that specialises in presentations of classic fairy tales, myths and legends for all ages.

The children absolutely loved listening to the funny and creative stories made by the storytellers. They were laughing, smiling and joining in with some moves throughout.

An absolute great week for the children!

We use necessary cookies to make our site work. We'd also like to set optional analytics cookies to help us improve it. We won't set optional cookies unless you enable them. Using this tool will set a cookie on your device to remember your preferences.

Necessary cookies enable core functionality such as security, network management, and accessibility. You may disable these by changing your browser settings, but this may affect how the website functions.